Loram’s 60 Years of Service in Australia 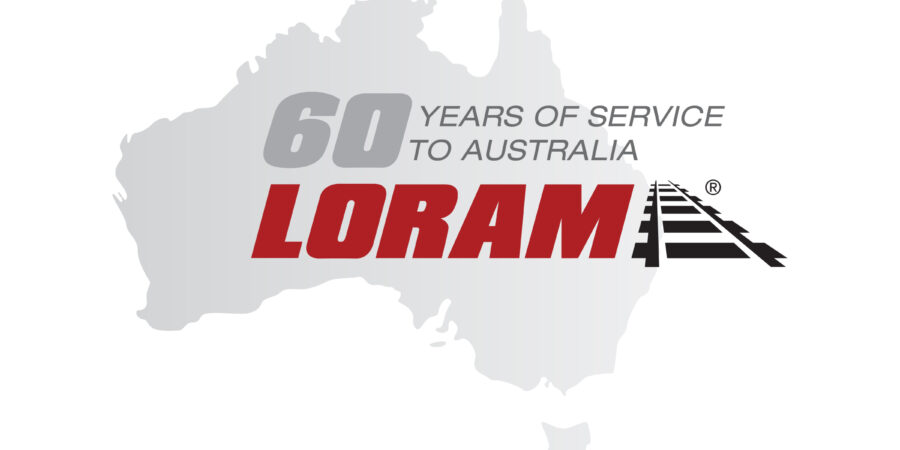 Loram’s 60 Years of Service in Australia

In June 2021, Loram passed the significant milestone of 60 years delivering service to the Australian rail industry.  Its history reflects Loram’s evolving strategy, and throughout those six decades shows commitment to delivering innovative solutions and unrivalled service to our Customers.

Mannix Contractors Pty. Ltd. was registered in Australia June 1961 and it opened an office in Melbourne.  It was soon bidding on civil construction projects in Australia within its expertise from major projects in Canada and the United States including the building of dams, mines, pipelines, highways and airports.  It also notably included the construction of railways, which is how the family business first got its start in Canada in 1898.  Like its other related entities, the company changed its name to Loram Contractors Pty. Ltd. in the 1970s. 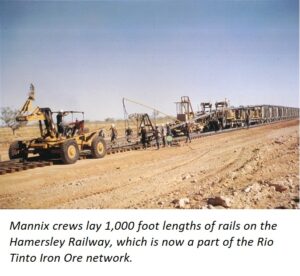 The first major Australian construction project was undertaken in joint venture between Morrison-Knudsen (M-K), Mannix, and McDonald Constructions to build the 193-mile Hamersley Railway in the Pilbara from Mount Tom Price to the port of King Bay starting in 1964.  The Hamersley enabled the transport of iron ore from mine to port with what were then the heaviest axle loads in Australia. Innovative equipment was introduced, including the ‘Autotrack’, Ballast Sleds, tracklaying machines permitting 1,000 foot lengths of rail, and patented track alignment equipment.  The rail was laid in record time by Mannix crews that included many Torres Strait Islanders recruited in North Queensland.  The Hamersley was completed for service and on schedule on 1 July 1966, despite Cyclone Shirley in May of that year.  M-K and Mannix thereafter provided maintenance to the completed railway line.

In 1967, the M-K, Mannix, and Oman joint venture (MKMO) started construction of 265 miles of grade, bridges and track for the Mt. Newman Railroad.  Again, Mannix rail-laying crews were largely composed of Torres Strait Islanders who laid an average of one mile per day.  New innovative equipment was also employed, including a semi-automatic sleeper laying machine, and rail loading equipment for quarter-mile strings.  In May 1968, 4.35 miles of track was laid in a single day to the 64-mile peg south of Port Hedland, smashing the previous world record of 2.88 miles set in the United States.  This incredible feat required 32 strings of welded rail, 13,050 sleepers, 28,200 anchors and the driving of 52,200 spikes.  A plaque commemorating this feat is located at the Don Rhodes Mining Museum in Port Hedland.  The Mt. Newman Railroad was completed in 1969 and is now part of BHP’s WAIO network.

The MKMO joint venture went on to extend the Hamersley from Tom Price to Paraburdoo from 1970 to 1972, 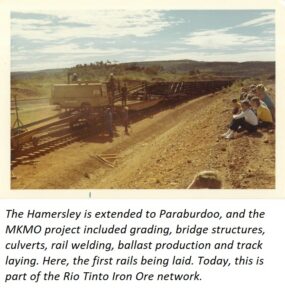 and construct the Robe River Railway from Robe River to Cape Lambert from 1971 to 1972.  Today, the Hamersley and Robe River form the Rio Tinto Iron Ore rail network.

Loram formed a joint venture in 1983 with Tamper called Australasian Rail Services (ARS).  ARS assembled RG7, a Loram-designed 44-stone rail grinder with profile grinding carriages, in Brisbane for an initial three-year contract on the Mt. Newman Railway.  Final assembly was completed in the Pilbara in June 1983 and the Loram-trained crew delivered contract service. 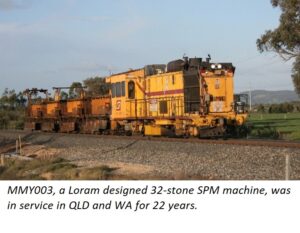 The joint venture was then awarded the supply contract for the first rail grinder on Queensland  Rail (QR).  MMY003, a Loram-designed 32-stone SPM machine, was also assembled in Brisbane and was commissioned with QR in 1987.  Over its 22-year life, this machine went on to be operated by many of Loram’s current employees initially in Queensland, and also in Western Australia in the first third party rail grinding contracting performed by QR.

By 1988, RG7 had been operating at a 99.8% service availability on Mt. Newman.  That year, Loram bought Tamper out of the JV and RG7 was modified to 32-stones and full flex electric motor carriages, permitting both plainline and turnout grinding.  Loram also manufactured the gauge convertible SX10 for operations on Western Australian Government Railways and other Customers performing plainline and turnout grinding.

RG7 completed its work in the Pilbara in 1999 and, after another upgrade to include 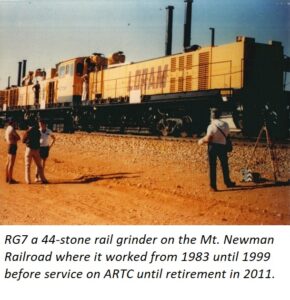 30hp motors and a rail vision system, was then contracted to ARTC.  In 2000, a Shoulder Ballast Cleaner, SBC7, was modified and delivered to Melbourne also for a contract on ARTC.  In mid-2000, Loram pivoted to servicing Australia as an OEM supplier and its contract service business, including RG7 and SBC7, was sold to John Holland.

Loram delivered John Holland two 4-stone grind carts (JH’s RG8) which was convertible across three track gauges; Loram later sold this machine to a Customer in South Africa.  RGI3, a 48-stone rail grinder, was commissioned in 2004 and operated as JH’s RG9 on standard gauge railways in the NT, WA, SA, Vic, NSW and QLD.  John Holland exited the rail grinding business in 2009, and today some of its rail grinding employees work at Loram.  RG7 was finally retired after 28 years in 2011, and SBC7 was retired in 2019.

Meanwhile, QR was continuing to grow its rail grinding service from its own track maintenance department to a full contract service offering to third party Customers.  After a global study of OEM suppliers, QR studied Loram’s RIV pre-inspection technique enabling single pass grinding operations in North America and went on to order several machines.  A gauge convertible rail grinder entered service in 2008 for all track service on WestNet.  Then, a production rail grinder and a specialty rail grinder were both commissioned to serve Queensland’s narrow-gauge networks.  QR also won a third party contract service tender and a production rail grinder was delivered for it in 2009. 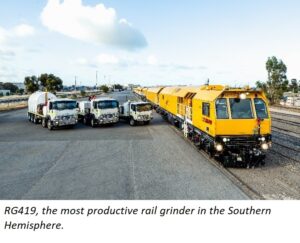 to Aurizon in 2015 for work in NSW before it began a contract in the Pilbara.  Then in 2019, Aurizon briefly took ownership of the most productive rail grinder in the Southern Hemisphere when it was commissioned in Adelaide.  In this period, Loram also sold an HP Shoulder Ballast Cleaner to an Australian Customer in 2013.

Loram’s contract service operations in Australia recommenced in 2013 with a return to the Pilbara with both a production rail grinder and a specialty rail grinder making first sparks.  In 2018, Loram re-established an Australian head office in Brisbane which also serves the Asia Pacific region. 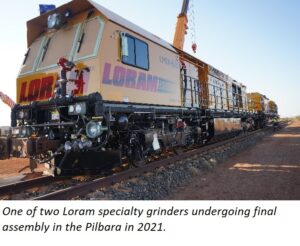 The transformational completion of the acquisition of Aurizon’s rail grinding business in  November 2019 united the Australian fleet of Loram rail grinders and combined the strongest and most experienced rail grinding team in Australia.  Loram has since been delivering contract service rail maintenance across all mainland Australian states to its roster of demanding Customers, including heavy haul and freight railroads and commuter and passenger systems.  Two additional specialty rail grinders joined the Australian fleet in mid-September 2021 for service in the Pilbara.

Today, in addition to world leading production and specialty rail grinding services, Loram’s rail maintenance solutions include ballast maintenance, friction management, material handling, and track inspection and optimization technologies.  Loram’s global expansion of contract service operations continues, and it now operates throughout Australia, North America, Brazil, the United Kingdom, and the Middle East, while also serving OEM Customers in many other parts of the world.  Like the record setting track laying crews on the Hamersley and Mt. Newman, its strong teams and innovative equipment again make Loram a leader at the dawn of its next 60 years serving the Australian railway industry.

Since 1954, Loram has brought the most advanced, most productive and most innovative railroad maintenance equipment and services around the globe. Loram’s product offerings include: rail grinding, ballast maintenance, material handling, track inspection services, friction management and structure monitoring. These comprehensive solutions are designed to help our customers achieve operational excellence, extend rail and track asset life and enhance efficiency to new levels.